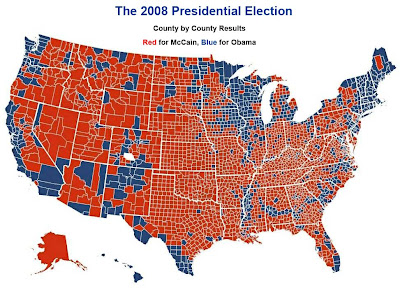 Received this interesting Email on the presidential race.

Professor Olson adds: "In aggregate, the map of the territory Republican won was mostly the land owned by the taxpaying citizens. Democrat territory mostly encompassed those citizens living in rented or government-owned tenements and living off various forms of government welfare..."

Olson believes the United States is now somewhere between the "complacency and apathy" phase of Professor Tyler's definition of democracy, with some forty percent of the nation's population already having reached the "governmental dependency" phase.
Posted by Unknown at 9:14 AM

I am short Obama. He is nooo different then any other politician.

All talk and no substance. This stimulus is a joke. Did you ever notice the people jump on a bandwagon the faster it jumps track. history is loaded with many examples.

Professor Joseph Olson neglected to tell you that it was Sarah Palin that was doing the estimates. LOL

I DO NOT MAKE RECOMMENDATIONS TO BUY OR SELL SECURITIES - I JUST POST TRADES I MAKE OR FIT THE RULES OF MY TRADING PLAN ON A DAILY BASIS. DO YOUR OWN DUE DILIGENCE - YOU ARE RESPONSIBLE FOR YOUR TRADES, INVESTMENTS, AND DECISIONS! ALL CHARTS COURTESY OF TRADESTATION, SCHWAb & TD AMERITRADE

Visit our American Oversea Memorials - We shall never forget their sacrifice