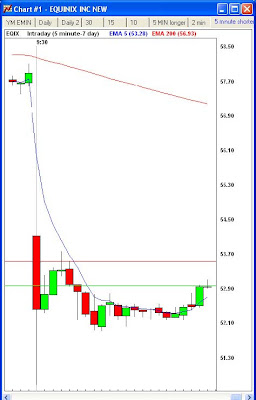 (Double Click Picture for a Larger View)
.
Stock:EQIX 5 minute chart
Entry Bar: 5
Entry Green Line: 52.93
Stop Red Line: 53.52
Result: .43 to 1.02...last quarter stopped at even
Setup Grade: B
Notes: Not the best setup for Double D but the market was so week and so was the bar. I actually missed this trade with my hand on the trigger because I was on the phone with Schwab over a screwed up order....

I placed a trade at 9:35 for a gap and go short. The order read it was open with no confirmation that I was in the trade. It would not let me cancel after I should have been filled. I called my broker and they didn't know if I was actually in the trade. Schwab was having a delay in trade execution. So here I am with no idea if I am in this trade and no way to get out if I was. The trade was set to have a .20 cent stop. I informed Schwab that if I am that my stop is .20 (at the time I inform Scwab I am .10 in the hole).......

So an hour later they finally get there orders in line and its confirmed that I was in the trade and now .80 cents AGAINST ME LATER. Like a 4R loss. So they are still trying to resolve the issue as there is no way I should have to be responsible for anything over the .20. Never had a problem like this before. To be continued.

* The setup grade is based on rules outlined in my business plan & not for the end result. Feel free to post any trades you made today that you would like commented on.

I DO NOT MAKE RECOMMENDATIONS TO BUY OR SELL SECURITIES - I JUST POST TRADES I MAKE OR FIT THE RULES OF MY TRADING PLAN ON A DAILY BASIS. DO YOUR OWN DUE DILIGENCE - YOU ARE RESPONSIBLE FOR YOUR TRADES, INVESTMENTS, AND DECISIONS! ALL CHARTS COURTESY OF TRADESTATION, SCHWAb & TD AMERITRADE

Visit our American Oversea Memorials - We shall never forget their sacrifice